An automotive electric car manufactured by the Kalashnikov Company was exhibited at an exhibition near Moscow, the capital of Russia. Manufacturers of the car believe that their vehicles will soon compete with Tesla.
The car, which is currently presenting it at a fair-colored exhibition, is named CV-1. 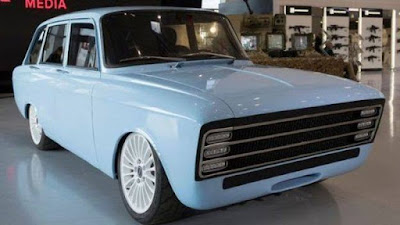 If you suspect that the old car comes in, do not doubt your artistic vision. Its manufacturers built it from the first model of the Russian Hatchback, which was manufactured in the Soviet Union in 1970. A car named Izh-Kombi.
Its design was revolutionized in its kind in those years.
The company’s CV-1 statement states that the sophisticated systems used in this car are the same as those of such well-known companies as Tesla.
They say the new model, which is complete, will be faster than the rest of Kalashnikov’s electric vehicles, and if its batteries are full, it will go 350 km continuously.
Since the design of the car has not yet been completed, it is unclear how much it will cost.
Kalashnikov is a company named after the designer of one of the easiest and deadliest weapons in the world. In recent years, the company has been trying to expand its products and produce clothing and accessories such as umbrellas.
ADB will pay the cost of building this railroad, and by creating it, Afghanistan will receive about 400-500 million dollars in transit each year, besides, 30 thousand jobs will be created for the citizens of the country.
361 Views

CURRENCY AND PAYMENTS IN AFGHANISTAN AFGHANI The currency in Afghanistan END_OF_DOCUMENT_TOKEN_TO_BE_REPLACED